Taking the Pain Out of Gas Leak Detection 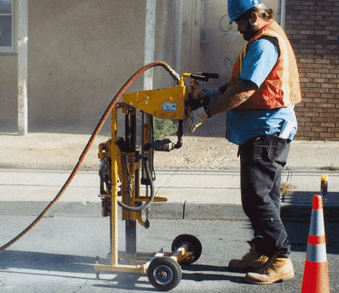 Gas leak detection can be quite a process, but nailing down what could be causing repetitive strain injuries to utility crewmembers might take nothing more than a quick look at the equipment.

That’s just what one U.S. gas company did after there were 14 injuries to its crews in just one year. It was enough to make it rethink its approach to drilling holes.

A Hand in Causing Injuries

At one time the, company’s three-man crews were using handheld rock drills to drill through concrete and asphalt to take readings. Over time, the drills began to do more than just create holes; they were taking a toll on operators, too.

Rock drills produce jolting vibrations, and on handheld models, the operator absorbs them. This leads to repetitive strain injuries to the arms, back and hands, including carpal tunnel syndrome and hand-arm vibration syndrome.

When this started happening in 2006, the gas company knew it had a problem and went searching for a way to fix it.

Drilling Down To a Solution

The gas company’s crews tested several frame-mounted models, but none were quite right. Then they spotted the frame-mounted Model 20 UTL drill from E-Z Drill.

E-Z Drill developed its Model 20 UTL in 1994 specifically for companies that need gas leak detection instruments. The pneumatic drill bores 5/8-inch to 2-1/2-inch diameter holes to a depth of 18 inches, and it’s engineered for safe and easy operation.

The unit’s frame absorbs vibrations, so it nearly eliminates the risk of repetitive strain injuries. It also is heavy enough to drill through concrete and asphalt without bouncing around. And, because it doesn’t fatigue like an operator might, it can operate at full power all day with no breaks.

Operator Supply and The Demanding Project

After working with a Model 20 UTL, a crewmember recalled a particularly taxing project where he would have welcomed one. “We were trying to pinpoint a gas leak on a state highway,” he said. “We had gas in a dump structure within a manhole, but we couldn’t figure out where it was coming from. And to top it off, we were working in 10-degree temps.”

When there’s a leak, crews have to keep working until it’s found. But the handheld rock drills caused the operators to tire, which made it impossible to work continuously. With that and the frigid temperatures, they needed to take frequent breaks to rest and warm up. Eventually the crew found the leak, but not before drilling 70 holes down 350 feet of road over four days and four nights.

“If we would have had the Model 20 UTL, we would’ve been able to drill those holes in a matter of two to three hours,” the crewmember said.

By the end of 2007, only 18 months after purchasing its first Model 20 UTL, the gas company acquired 15 more. Since then, there hasn’t been a single injury, there are no more daylong searches for leaks, and there has yet to be a single maintenance issue on any of the units.

A national safety committee has even recognized the gas company for its work with the Model 20 UTL drills, and their ability to reduce the potential for injuries.

As this gas company quickly learned, pinpointing gas leaks can be challenging, but with the right tool it doesn’t have to be a pain.